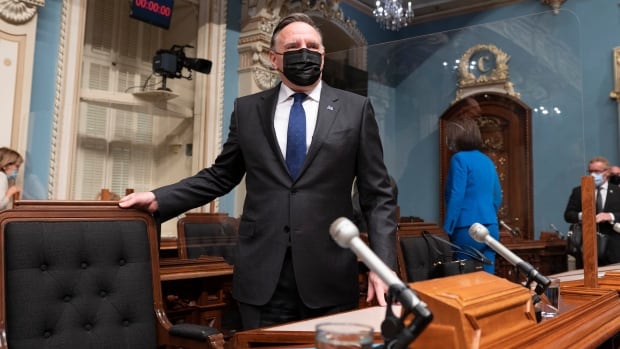 The Legault government will soon unveil the details of a new course in its program and teachers fear that it presents a narrow view of Quebec society.

The new course will focus on Quebec culture and citizenship.

It will replace the Ethics and Religious Culture program, also called ERC, in place since 2008. It is often criticized by Quebec nationalists who say that it promotes multiculturalism instead of what they consider to be Quebec values.

Prime Minister FranÃ§ois Legault launched a session of the National Assembly earlier this week, with the next provincial elections in less than a year.

During his speech, Legault said removing the ERC program for a course on culture and citizenship would help ensure â€œnational cohesionâ€.

“This national cohesion is very precious and must be cultivated from childhood,” said the Prime Minister during his speech.

â€œWe must pass on to our young people more knowledge about our history, our culture and the functioning of Quebec society. We need to convey a sense of pride, of shared citizenship.

Education Minister Jean-FranÃ§ois Roberge is expected to reveal what to expect in the new school curriculum at a press conference on Sunday.

Last year, Roberge said the current curriculum, which is taught from elementary school through high school, places too much emphasis on religion. The new curriculum, he said, would include topics such as citizen participation, democracy, legal education, sexuality, people-to-people relationships, ethics and eco-citizenship, and digital citizenship.

The subject of religions should always be included in the course.

The new curriculum is expected to be taught in select schools next year as a pilot project, and will be taught in elementary and secondary schools across Quebec from 2023.

For Sabrina Jafralie, director of ethics and religion at Westmount High School, the government is clearly looking to score political points with the new program.

“Isn’t that obvious right now? We are entering a year of provincial elections and it appears once again that the death of [the Ethics and Religious CultureÂ program] is used as a political chess game, â€Jafralie said.

â€œThe ERC is a course you don’t pay attention to. Teachers are underdeveloped. They are always given the ERC at the end of their schedule. And suddenly it is at the forefront of national cohesion.

On Tuesday, Deputy Premier GeneviÃ¨ve Guilbault raised her eyebrows with her comments on the province’s new curriculum.

Guilbault told Radio-Canada that the new course would help students become proud Quebecers “with, of course, a little chauvinistic flavor”.

Jafralie says she fears that the voices of the different communities that make up Quebec society will be stifled in the new program.

“I am very curious to see what national cohesion means, and whose history and values â€‹â€‹are going to be implemented.”

In a statement, the Autonomous Federation of Education, which represents nearly 50,000 teachers, said many questions remain unanswered about the program change.

â€œWhat are we talking about when we talk about Quebec citizenship, in relation to which values â€‹â€‹and by whom will they be defined? the statement read.

â€œIs there not a danger of political drift?

Anthony Cooperwood, who teaches the ERC program at Rosemount High School, says he welcomes the idea of â€‹â€‹helping students become proud Quebecers, but says the changes to the curriculum are affecting what is. discussed and what does not make him nervous.

He says the current program helps students understand the diversity that surrounds them on a daily basis.

Cooperwood also says he’s concerned that the province’s new program is, in some ways, redundant.

â€œIf we are talking about promoting pride in Quebec culture, I know that there are already courses on Quebec history,â€ said Cooperwood.

He is in favor of abolishing the ERC program.

“It would be nice if the new course was about a different way of seeing live together, living together, maybe something closer to what we call cultural convergence, â€Rousseau said.

“It’s really about building the culture all together instead of everyone having their own culture, which is more of the multicultural model.”

He says he expects there to be skepticism about the content of the Quebec culture and citizenship course.

“Some will see him as very nationalist, or something to do with the ideology of the CAQ [government]”he said.” But I think it should be balanced so that most people agree with the content of the course. “