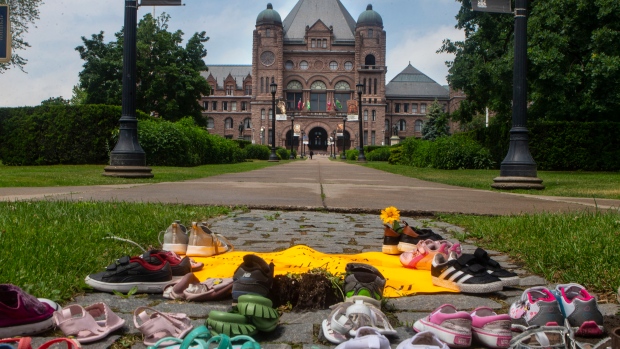 TORONTO — A day before Canada’s National Day for Truth and Reconciliation, the Ontario government announced changes to the school curriculum, pledging to strengthen Indigenous learning in grades 1-3 throughout the next two years, including an introduction to the residential school system.

On Wednesday, the Progressive Conservative government said it hoped to “close the current gap” in Indigenous learning by adding lessons about First Nations peoples to the social studies curriculum for the first three years of school. by September 2023. This includes the following:

The province will also offer Inuktitut as the language of instruction at the elementary and secondary levels through the Ontario Native Languages ​​curriculum.

The government says the changes are in response to the Truth and Reconciliation Commission’s call to action.

“Like all Canadians, I was saddened by the recovery of unmarked graves at former residential schools across the country. For more than 120 years, Indigenous children across the country have been taken from their families by the government, many of whom would never have been reunited with their loved ones,” said Ontario Education Minister Stephen Lecce, to reporters at a press conference.

“We believe that all students, Indigenous and non-Indigenous, are enriched by learning about the history, culture, perspectives and contributions of First Nations, Métis and Inuit individuals and communities in Canada.

The government also pledged to provide $23.96 million in funding for Indigenous education in 2021-22 “as part of a broader commitment to reconciliation,” in addition to a funding agreement multi-year funding of $3.19 million over three years to strengthen partnerships with the Chiefs of Ontario and First Nations Provincial Territorial Organizations.

However, that same year, the newly elected Progressive Conservative government abruptly canceled curriculum writing sessions with Indigenous leaders who would have seen greater inclusion of First Nations learning in schools.

Speaking to CTV News Toronto, Liberal Leader Stephen Del Duca said he was proud of his government’s role in those early changes, but also acknowledged it “didn’t do all the work.”

“I think in the early days of the Ford government it was a deliberate decision to be deaf about it and go in the wrong direction because I guess ideologically Doug Ford at that time- there just didn’t believe it mattered,” Del Duca said.

“I hope Doug Ford realizes he made a mistake. He made a big mistake canceling this program, these studies, and he’s reinstating them, and he’s looking at the rest of the options available to him. as Prime Minister to advance the cause of Indigenous reconciliation.

In a news release on Wednesday, the government said it has been discussing revisions to the program with Indigenous partners since 2019.

In light of this announcement, officials were asked why the Progressive Conservative government did not make September 30, Canada’s National Day for Truth and Reconciliation, a statutory holiday or commemorate it with an event at Queen’s Park.

Greg Rickford, Minister of Indigenous Affairs, noted that many Indigenous leaders and politicians have weighed in and there is not much consensus on how the day should be recognized.

“A dark day of reflection does not necessarily correspond to the concept of a holiday, we want to ensure, first and foremost, as Minister Lecce did today, that this is integrated into our programs which, that it is embedded in stand-alone courses but also in the context of the birth of Canada,” he said.

“The discussion will evolve here in Ontario and across the country, as there are a number of other provinces that have yet to make a holiday an official event.”