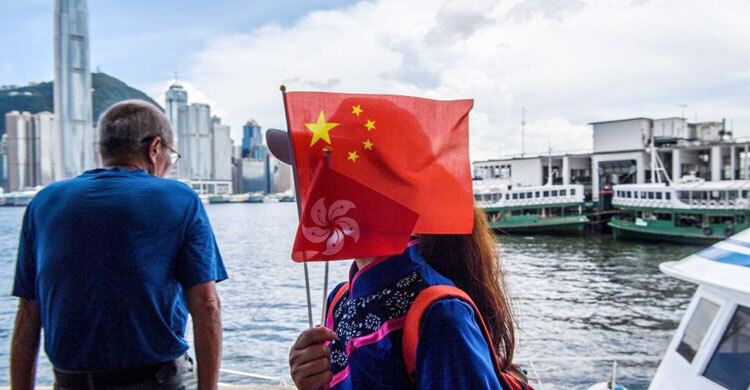 New textbooks for schools in Hong Kong will state that the territory was never a British colony, local media report.

Instead, the books state that the British “only exercised colonial rule” in Hong Kong – a distinction drawn to highlight China’s claims of unbroken sovereignty, the BBC reports.

China has always maintained that it never relinquished its sovereignty and that its surrender of Hong Kong to the British was due to unjust Opium War treaties in the 1800s.

The UK returned Hong Kong to China in 1997 after ruling for more than 150 years.

During his reign, he referred to Hong Kong – a port with a deep harbor that became a booming city-state and one of the world’s major financial centers – as a colony, as well as a dependent territory.

The new textbooks attempt to explain the differences between a colony and colonial rule – the texts stating that for a country to call an external territory a colony, it must have sovereignty as well as governance over the area.

In the case of Hong Kong, the British “only exercised colonial rule…so Hong Kong is not a British colony,” the textbooks say, according to local media.

The books were written for a specific course to be taught in Hong Kong schools focusing on the ideals of citizenship, legality and patriotism.

Chinese authorities directly criticized the course during the city’s 2019 mass pro-democracy protests, saying such education had “radicalized” young people and given them bad ideas.

The new textbooks – which have not yet been printed and are awaiting final approval from Chinese authorities, according to local media – also reflect Beijing’s characterization of the mass pro-democracy protests in 2019 as a threat to the security.

The South China Morning Post reported an excerpt from the protests: “Secession and subversion against the government have been advocated in some of these activities threatening sovereignty, security and national interests.”

Although incidents of violence occurred during protests in 2019, the majority of protests were largely peaceful. Human rights groups have also made accusations of police brutality and mistreatment of peaceful protesters during this period.

Timothy Lee, a former pro-democracy lawmaker from Hong Kong who is now exiled from the territory, was among critics expressing concerns about a “rewriting” of history.

What has happened since the transfer?

After the handover in 1997, Chinese communist leaders classified the city as a special administrative region with its own governance and economic system, allowing individuals more freedoms than on the mainland.

Following major protests in 2019, China cracked down on civil liberties once allowed in Hong Kong.

In 2020, it passed a national security law that effectively banned almost all forms of political criticism.