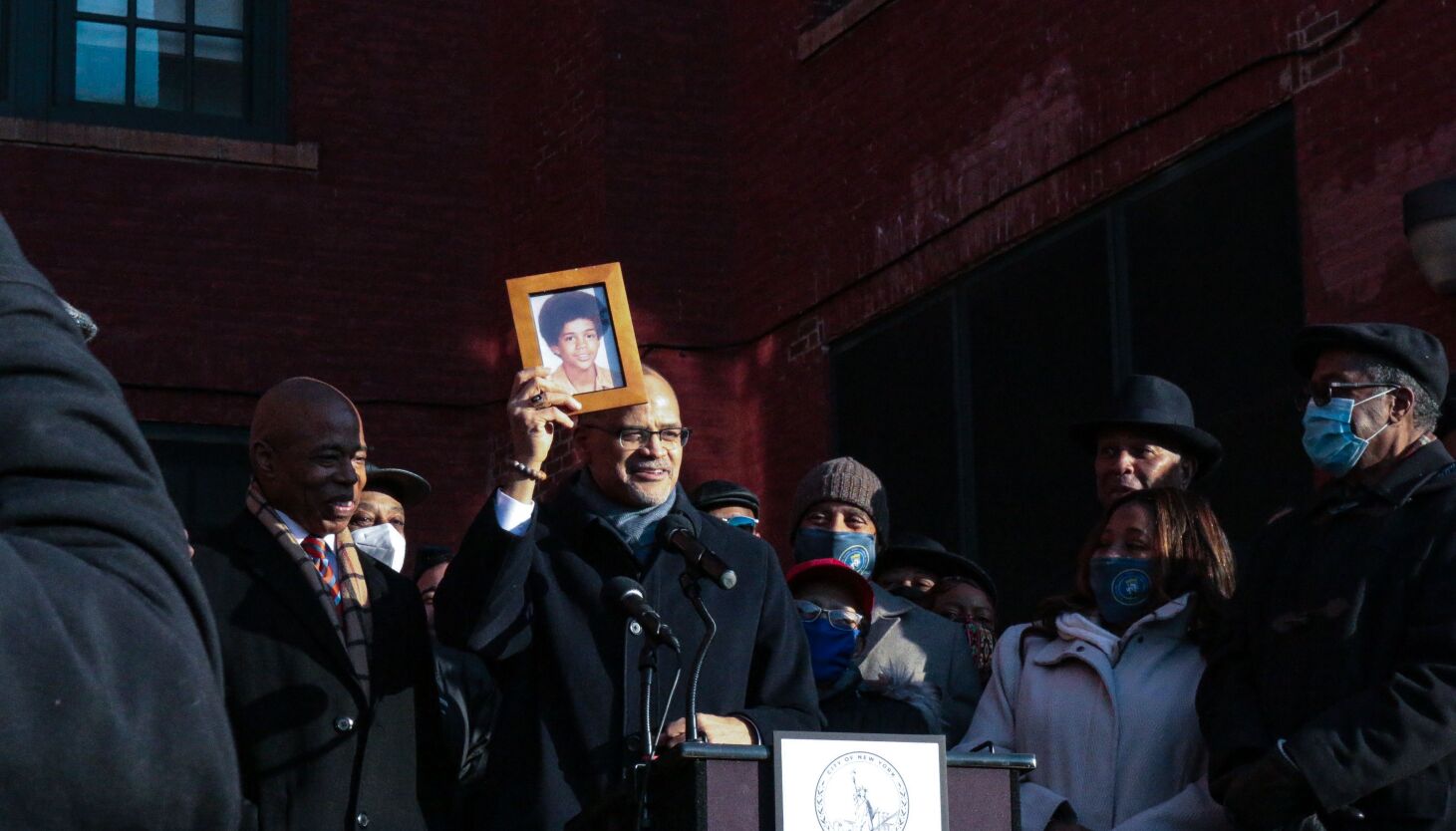 Outside of PS 161 in Brooklyn, which Banks attended until fifth grade, the pair repeatedly noted that about 65% of students of color are not considered proficient in reading or math and argued that the Education Department’s $38 billion budget was not producing the results it should.

“If 65% of white kids didn’t achieve proficiency in the city, they would burn the city down,” Adams said.

Although they didn’t provide many details about how they plan to improve outcomes for the neediest students, Banks and Adams — who both attended public schools in the city — began to outline some priorities.

They highlighted early childhood programs, a plan to launch universal screening to identify students with dyslexia, improve student access to healthy food and ensure more students are exposed to career options before graduating.

Adams also said he wants to replicate schools that have found successful models, including traditional public schools, charter schools and even religious schools. “Wherever we find excellence, we’re going to replicate that,” Adams said.

This approach is reminiscent of “portfolio model” of school management that some cities have adopted, which consists of expanding schools deemed effective and closing those that are not up to standard. (Banks did not say if he would close any schools.)

In some of his fiercest comments, Banks said the city’s students had huge promise, but were held back by a system that often didn’t serve them well.

“Every young person who attends our schools across the city is filled with genius, potential promise and gifts,” he said. “They exist in a school system that is fundamentally flawed.”

Tell us about the most pressing issues at your school that you hope the new leader will address.

Banks pledged to shake up the Education Department bureaucracy itself, indicating that administrators who work at department headquarters could be redeployed to work closer to schools.

“Here is the question that will be asked of everyone who works in this department: if you left and your job disappeared tomorrow, would that change anything about what is happening in one of our schools? Banks said. “There has to be a transformation and it will start at the top.”

Banks said he would involve parents, students and educators in key decisions as chancellor, saying he would never make a major announcement without their input.

“The answers to how we reorganize the system exist in the hearts and minds of teachers, principals, children and their families,” Banks said. “If we want to create an innovative school system, you can’t do it without involving the community.” He noted that he plans to raise student voices by ensuring that there is student government in every school.

In some ways, Banks and Adams’ comments represented a direct repudiation of the previous administration, though neither has yet spelled out exactly how they will approach education policy, or even set a signature goal such as Mayor Bill de Blasio’s successful push for pre-college education. Kindergarten. At the same time, Adams praised some approaches that mirror those of de Blasio, including providing schools with resources such as eyeglasses and washing machines so that students’ basic needs are met.

Adams, who hasn’t considered many other candidates to lead the nation’s largest school system, said he’s been in conversation with Banks for years and doesn’t feel the need to conduct extensive research. , noting that he wasn’t looking for someone with Ivy League degrees or complicated parenting philosophies.

“I didn’t have to do a national search to find someone who doesn’t understand our city,” Adams said to the cheers of dozens of supporters who gathered for the announcement.

During the press conference, Banks pointed to his own roots in New York, holding up a photo of himself when he was in fourth grade and another photo of a cherished teacher who taught him black history in PS 161.

Banks also has a long experience in schools – having even worked for a year as a school security officer. His teaching career began in Brooklyn in 1986 and he eventually became the founding principal of a school in the Bronx in 1997.

In 2004, he helped launch Eagle Academy, which was designed to serve boys of color and has now grown into a network of six schools, one in each borough and another in Newark. (At Thursday’s press conference officially announcing his appointment as chancellor, Banks was surrounded by educators and students from Eagle Academy as well as his parents and other relatives.)

The launch of Eagle Academy gave Banks an intimate sense of the city’s educational landscape, although he had never held a senior administrative position within the department or led a large organization. Banks’ current role is heading a foundation that helps support Eagle Academy schools, which are operated and overseen by the city’s Department of Education.

Banks takes the reins at a tumultuous time, as schools across the city continue to be disrupted by the coronavirus pandemic for a third school year. But he also has an influx of resources at his disposal, including billions of dollars in federal relief and substantial state funding increases. One of the most critical decisions he will face is how to spend it.

The new chancellor has also begun to form his cabinet. He tapped Dan Weisberg – who runs an organization focused on teacher quality and has dealt with labor issues under Mayor Michael Bloomberg – to be his chief deputy. The move is likely to raise eyebrows at the city’s teachers’ union, which has previously opposed Weisberg.

Michael Mulgrew, head of the teachers’ union, did not attend Thursday’s press conference but issued a statement in support of Banks’ appointment. (The head of the principals’ union attended the event in person.)

Banks was less keen on addressing some of the burning issues he will soon have to tackle.

“Don’t ask me about gifted and talented people today,” Banks said, referring to de Blasio’s proposed overhaul of the program.

“Don’t ask me about specialized high schools today. We will have answers to all of this. But today is the day of the party.

If you are having difficulty viewing this form on mobile, go here.