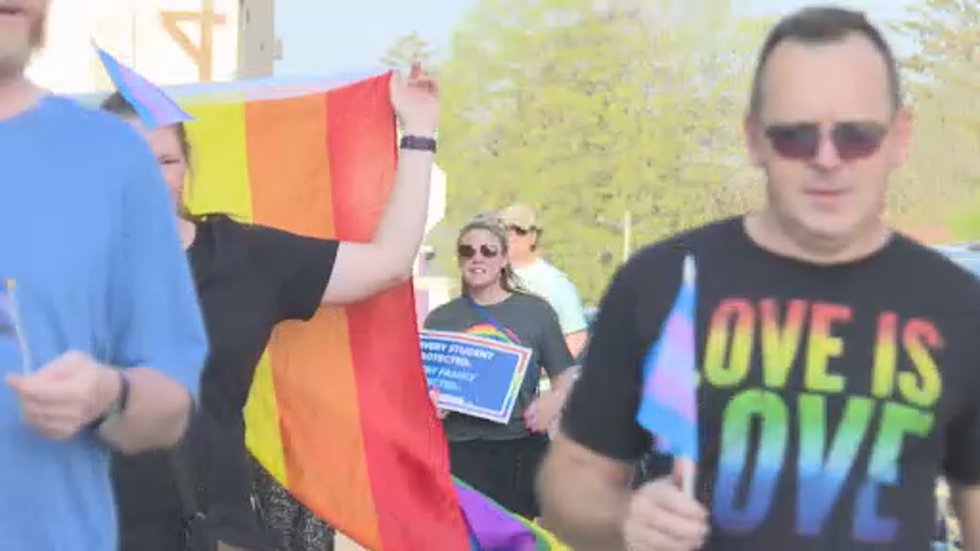 The presentation and question-and-answer session titled “Keeping the Conversation” was prompted after a recent school district meeting where parents expressed concern about some elements of the program.

One organizer, who did not want to be named for her safety, said she and other hosts did not want “graphic” material shown in schools and wanted parents to have the power to review content.

“As parents, it is our duty to maintain the innocence and vulnerability of our children, especially very early in their school career,” a statement from the organizers wrote in part. The full statement is below.

NBC15 crews were barred from the event, as the organizer said she wanted everyone inside to feel safe.

Meanwhile, dozens of people joined in a march around the building, including Gwenna Mlsna who came out to show her support for the district’s diversity and inclusion efforts.

“There are no inappropriate books in the curriculum,” said Mlsna, a junior from Mount Horeb High School.

She explained that she had taken a psychology course with a sub-unit on gender expression and identity: “It was the only time that was ever brought up as a real subject in class. For this unit, we looked at real-life examples of people and their experiences. We haven’t read any books with inappropriate content or anything like that.

“I think the school district shouldn’t censor age-appropriate books,” said Justin Wilder, who also attended the rally. “As a former educator myself, we have to let educators do what they do best, which is to educate.”

The full statement from the organizers follows as such:

This event was created following the Mount Horeb Area School District (MHASD) meeting on April 13, 2022, where parents expressed concern about some of the elements presented in the K-12 curriculum. . Attempts were refused by MHASD to continue the conversation before the start of the following school year. As more and more parents spoke, it was clear that the conversation needed to continue, and that was the call to create this event.

Parents want to be included when it comes to our children’s school curriculum; all voices deserve to be heard and alternative viewpoints shared. We are hosting this event as allies of all MHASD students, teachers, staff and families. We look forward to contributing to the continued desire for diversity, equity and inclusion in our community. As parents, it is our duty to maintain the innocence and vulnerability of our children, especially very early in their school career; this is why many parents wish to sit at the proverbial table to know when certain subjects are presented to their small children, by whom and in what way.

A few community members, without having spoken with the hosts of the event, spread misinformation that this event is a direct attack on the LGBTQ community and further expressed it as being “anti-teacher”; both statements are completely false.

The event hosts reached out to community members and the PFLAG Mount Horeb Board of Directors and shared our intentions for this event. We further requested to meet with PFLAG representatives in person, prior to the event, in hopes of unifying and creating understanding; our requests were refused.

The purpose of this event is to have a respectful listening session with a brief Q&A at the end of the event. This intent was misaligned by the community group PFLAG to create a division. Due to the unfortunate misinformation shared on social media, event organizers have made the executive decision that the event be 18+.

We all want to be united and inclusive. To achieve this, we need to have difficult conversations, ask questions and work together. It is achievable.