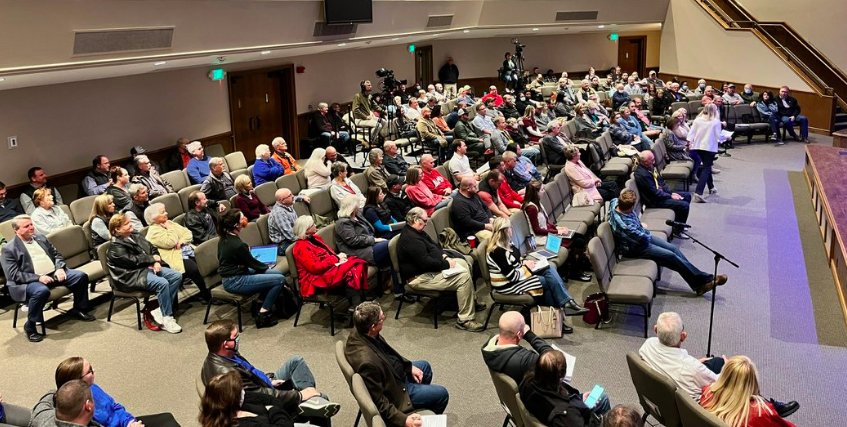 Chelsea residents had the opportunity to voice their comments and concerns about a new municipal school system and property tax at the city’s first public hearing on January 28.

A crowd nearly filled the seats of Liberty Baptist Church. Chelsea Public Information Officer Wayne Morris opened the meeting, saying he hoped the conversation would lead to a better understanding of the issue and the direction the city should be taking.

The Mayor and Council each had an opportunity to speak before the meeting was opened for public comment.

Mayor Tony Picklesimer said he had wanted from the very beginning of this endeavor to try to find a way to build a new secondary school and provide better facilities for pupils attending schools in Chelsea. Its original intention was to include all areas and the 4,500 pupils who currently attend schools in Chelsea, but residents of some of these areas, such as Dunnavant Valley and Highland Lakes, have made it clear they do not want to be involved in this.

“As a grandfather, I’m a yes to the $30 million property tax that would allow us to build a new high school,” Picklesimer said. “But I’m not standing here as a grandfather. I stand here as your mayor. You elected me, and it is my job to represent you and what you would like to see happen. In the end, it will come down to a decision by the voters of Chelsea Town, as it should be.”

Picklesimer presented four options regarding the formation of a school system in Chelsea:

“These things don’t happen overnight,” Picklesimer said. “It would take several years of preparation. But without moving in a certain direction, we will be stuck where we are now. I promise you that as your mayor, I’m listening, no matter what I personally think. My job on this board is to represent you, and that is my full intention.

Picklesimer said one thing that may or may not have been clarified is that all of council will be able to decide on a level of taxation that will be presented to residents.

“We cannot make this decision as a city council,” he said. “This decision will come down to a vote of the people. The council is trying to determine through this public hearing what level of taxation you propose for approval.”

Councilor Cody Sumners thanked the crowd for coming and said he looked forward to hearing from them and coming back and meeting the mayor and council members and discussing all realistic options moving forward. .

Councilor Chris Grace said that as a community they have identified a problem that needs to be addressed and school facilities have not been able to keep up with the rapid growth of the town.

“I would say option 1 is not an option,” Grace said. “There is nothing we can do. I think it’s irresponsible.”

He said that since his family moved to Chelsea in 2003, three elementary schools have been built and there have been additions to middle and high schools, but population growth has outpaced those improvements.

“Any solution we come to will require higher taxes,” Grace said. “As we continue to grow, and we will, if we are to maintain a high quality of life, we will have other needs that will arise, and those will also require public funding. We must balance our known needs of today with our unknown needs of tomorrow.

Councilor Casey Morris thanked those present and said he looked forward to working with council and the community to better address this issue.

Councilman Tiffany Bittner said this is an important time and the town has an opportunity to shape its future for its children and community.

“I believe now is the time to do something about our schools, and frankly, something should have been done a long time ago,” she said.

Specifically, Chelsea Park Elementary doesn’t have enough classroom space, the middle school is outdated and worn out, and the high school was built in 1992 for 580 students and currently has more than 1,385 students, she said. .

“The list goes on and on of all the basic necessities that our facilities require. and we’re at a point where we have to do something about it,” Bittner said.

Pro Tem Mayor Scott Weygand shared information on city revenue and spending. Municipal system revenue would be $31.8 million because that’s what Shelby County gets from Chelsea, he said. The projected expenditure to run a school system would be $30.6 million, meaning the system could put money in the bank without raising taxes, he said.

More than 20 people signed up to share their comments and opinions. Here’s what some of them had to say:

Mayor Picklesimer responded to some of the comments at the end of the meeting.

As for the 1-cent sales tax passed in 2019, $4.4 million was collected, of which $1,060,505 was spent on grants for items requested for Chelsea schools. The rest of the money is in the bank to continue providing grants to schools, he said.

He said he received a lot of flak over the $600 property tax example. He said that because of the median house price in the city, he chose that number based on the average.

“I know it’s a big problem. I love Chelsea and want the best for the students and your children and grandchildren,” Picklesimer said. “If that’s not the route you choose to take, so be it. This is the last term you will have me. If we don’t move forward, my last three years as your mayor will be much easier. That’s not what it’s about. It’s about representing you, the people.