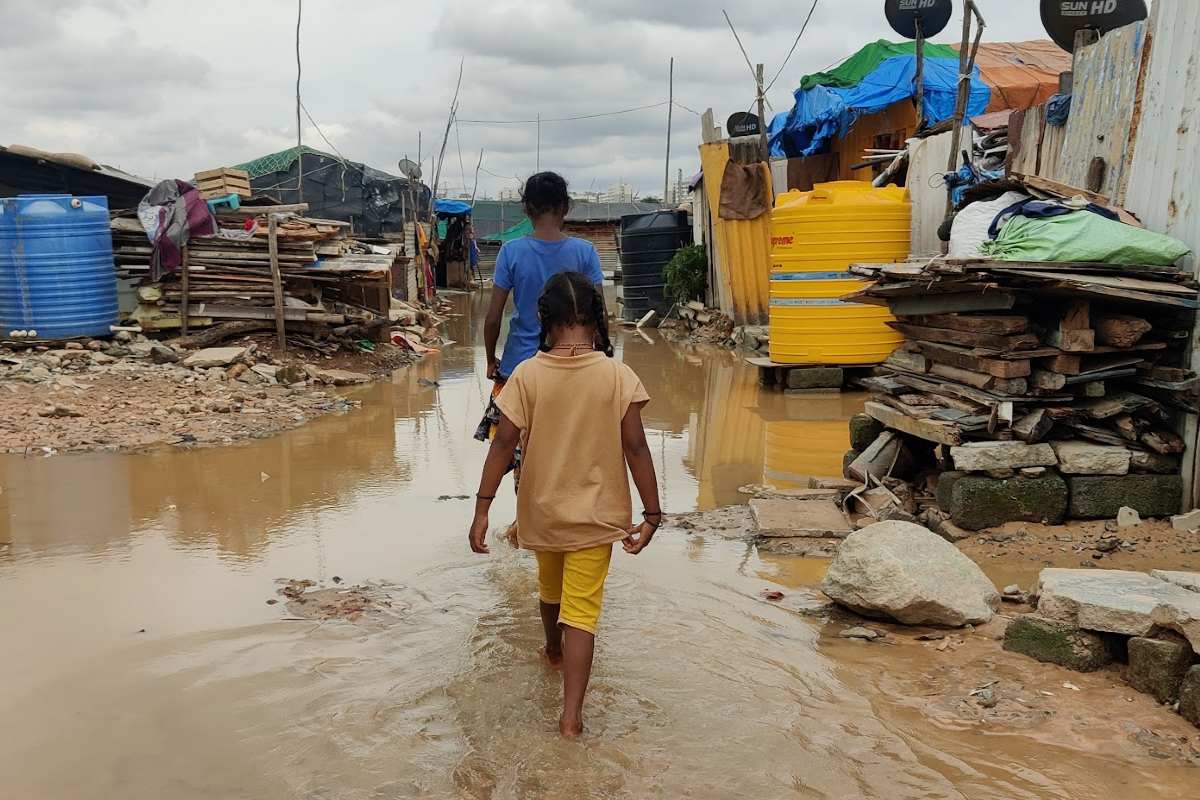 Heavy rains that have battered the city in recent days have wreaked havoc in the Munnekolala slum near Whitefield in Bengaluru, where residents are struggling to return to normal life.

Indushree, a class 6 student residing in Munnekolala in Bengaluru, is afraid to return to school. The heavy rains that have battered the town in recent days have wreaked havoc on their slum and all of its school supplies have been lost in the ensuing floods. “The school said they won’t give us any more books, so I’m afraid we’ll be punished if we don’t buy new books,” she told TNM.

Munnekolala, located near Whitefield in Bengaluru, is home to more than 500 families, most of whom are daily laborers ranging from pourakarmikas and rickshaw drivers to construction workers and domestics. Families are living in makeshift homes, and the area was among the hardest hit by heavy rains that flooded many parts of the city on Monday night, September 5. As the water began to recede at Munnekolala, the flood threw their lives away. completely disengaged. Water had risen up to four feet from ground level, while heavy rains and flooding disintegrated their makeshift homes, leaving furniture, clothing and plastic items floating here and there.

The Karnataka government provided temporary shelter for the families in the form of tarpaulin tents on a higher plane of land, where the families stored essential items like cooking containers that were not washed away by the storm. ‘flood. When TNM visited Munnekolala, we found many residents scouring their flooded homes for money, cell phones, clothes and other important possessions.

About 50 children live in the area, most of whom study at the nearby public primary school. In light of the water mess, the school has asked them to stay home until next week. But like Indushree, many are afraid to return now, as floodwaters have submerged all their school supplies. “When the water receded a bit, we went to get our things from our flooded house. But all is lost now. It’s impossible to find anything under the dirty water,” says the 11-year-old. year.

Santosh, who studies in Class 3, says he doesn’t know what to wear once school resumes because their uniforms were also lost in the floods along with their books. “I asked my teacher if he could give us some extra uniforms because mine got lost in the flood. They said all their uniforms were sold out, so they couldn’t give us new ones. We have to wear our own clothes and go to school, but my clothes are also in my house, which is now submerged,” he says.

With little government or school support, the children are forced to rely on their parents’ meager income to get through this unprecedented situation. Santosh’s friend Shekhar, who is in class 2 and wants to be an engineer when he grows up, says: “My parents tried to find my books in the flood, but they were all completely damaged. They don’t have the money to buy new books, but they said they would try.

“We work so hard to send our children to school. We don’t earn much. Our living conditions are pathetic, but we want our children to have a better future than ours, a future in which they would not face the kind of problems we are currently facing,” Indushree’s mother, Gangamma, laments. Additionally, the school has now moved to online classes for student safety, she adds. “But only my husband has a phone. How will my children study when he is away for work? We haven’t even had electricity here for a week,” she said. Most children in the settlement camp do not have access to smartphones or even the internet for online lessons. Instead, they now spend their time helping their parents clean up or play in the large puddles of dirty water. 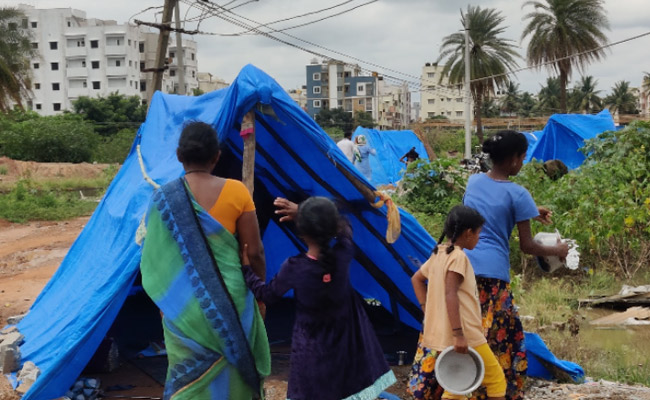 Gangamma is afraid that her children will not be able to continue their studies. “Most of the kids here usually give up. I don’t want my children to go through the same thing. We came here to find work, so that we could settle down. But we don’t even have a house now, and all our possessions are gone. It’s always the fate of people like us,” she told TNM.

Due to the waterlogging, residents’ access to basic necessities such as drinking water has also been cut off. As part of the relief efforts, the state government provided a few canisters of drinking water. However, these cans are priced at Rs 15 each, so most locals choose to store rainwater in large barrels, using this worm-infested water for drinking, bathing and bathing.

Meanwhile, several student organizations have condemned the state government for failing to provide extra books, uniforms and other materials to students who have been affected by the rains. Unions affiliated to the All India Central Council of Trade Unions (AICCTU) have also lodged several complaints with the Bruhat Bengaluru Mahanagara Palike (BBMP) and state government authorities, seeking to secure temporary shelters, provision of rations free, sheets and clothes, among others. facilities to those affected. The unions have also asked the government for compensation for the losses suffered by the populations due to the flooding of their household items, two-wheelers, rations, utensils, clothing, etc.