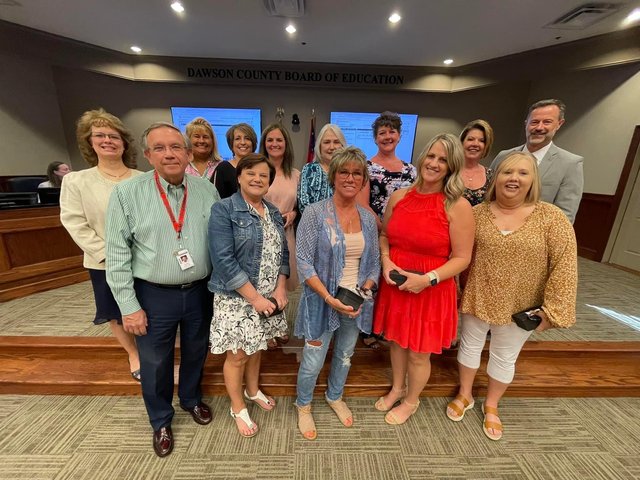 At the May 10 meeting of the Dawson County School Board, board members took time to honor and recognize several outgoing educators and administrators, including outgoing district superintendent Damon Gibbs.

As the meeting began, Deputy Superintendent of Human Resources and Operations Hershel Bennett called each of the retirees to the front of the room, thanking them for their hard work for the school system and congratulating them on their retirement.

“The 21 people in the room with the biggest smiles are our retirees for FY22,” Bennett said.

Each retiree received an award honoring their dedication throughout their careers, and all the students, parents and public educators cheered for them.

The retirees from the school system for the 2021-22 school year are:

“I was very emotional for a few weeks, and let me tell you, the emotion doesn’t come from being sad; it’s actually being proud of the work you’ve done,” Gibbs said.

Gibbs read a statement he had written encompassing his final thoughts, prompting tears from many of the school’s board members and administrators in the audience. He recalled a call he received from Roger Slaton eight years ago, asking if he would accept the position of Superintendent of Dawson County Schools, and how Slaton, along with the other board members and all staff and administrators, had welcomed him into the community with open arms.

“Over the past eight years, I couldn’t have imagined a better opportunity to make a difference; this advice allowed me to think outside the box and do whatever it took to meet the needs of our children,” Gibbs read in his statement. “Your support has been unwavering even in the most difficult of circumstances.”

Gibbs ended his remarks by saying he wishes all the best for the district as he retires, handing over to new Superintendent Nicole Lecave.

“I pray that God continues to bless our 1Dawson team; we never know what tomorrow will bring, but together we can overcome anything,” Gibbs said. “And I would say it’s not a goodbye; it’s later.

Following Gibbs’ statements, board member Karen Armstrong spoke on behalf of the board, presenting Gibbs with a gift and thanking him for his hard work over the past eight years.

“We wanted to give you just a little something from us…it’s not a million dollars but there’s a million dollars of love here for you,” Armstrong told Gibbs. “We appreciate you; not only our school system, but also us and the children.