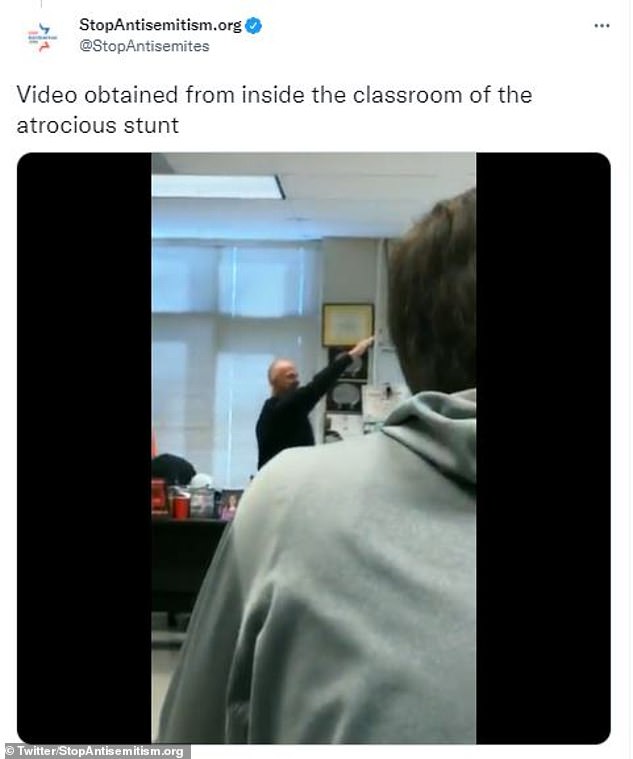 Birmingham’s Civil Rights Institute has called “baffling” an Alabama school system’s response to a Jewish student’s complaints that a teacher had asked classmates to give a Nazi salute and that he showed a lack of commitment to diversity.

While Mountain Brooks Schools released a statement saying it was “deeply sorry for the pain” caused by a lesson that “lacked sensitivity”, the Birmingham Civil Rights Institute questioned the actions taken by the system.

In a story first reported by Birmingham-based Southern Jewish Life, a Jewish student said he was shocked last month when a history teacher at Mountain Brook High School asked his Classmates stand and greet the Nazis with stiff arms during a lesson on how symbols change. The teacher has not been identified.

The student, Ephraim Tytell, said school officials reprimanded him and told him to apologize to the teacher after he shared video and photos of the incident on social media. Tytell said he refused.

Tytell, the only Jewish student in the 11th grade history class, and several of his classmates refused to stand up. “I felt upset, unsure of what was going on. Just a little shocked,’ Tytell said SCS 42.

The school system, which is just outside Birmingham and includes four elementary schools, a middle school and a high school, has previously come under fire from civil rights groups and activists after scrapping an anti-bias curriculum and diversity produced by an organization that fights anti-Semitism. after several anti-Semitic events.

“It is in this light that we find a more recent incident involving the Nazi salute displayed by students in a Mountain Brook classroom particularly disconcerting, as it shows a clear lack of preparation on the part of administrators to discuss, teach and lead. in this domain. ‘, the city’s educational institute said in a statement on Friday.

Mountain Brooks Schools have been accused of showing ‘a gross lack of preparedness on the part of administrators to discuss, teach and lead’ after an anonymous teacher (pictured) asked pupils to stand and greet students Nazis during a history lesson. 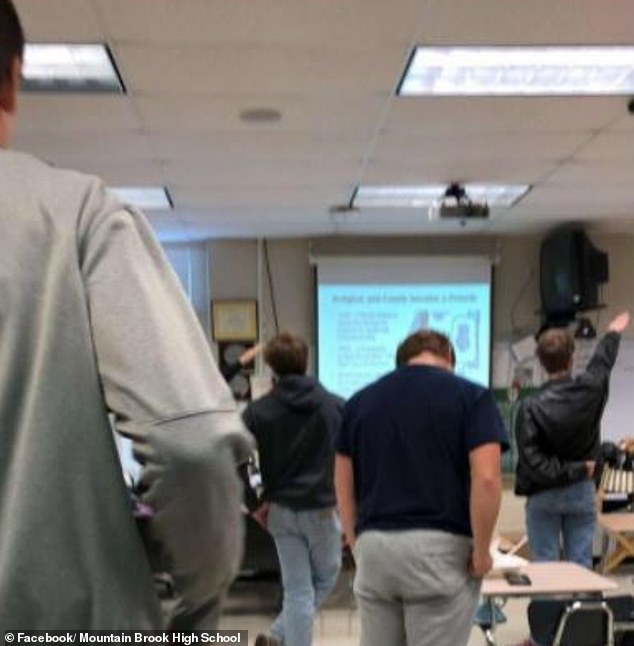 Mountain Brooks schools have previously come under fire from civil rights groups and activists after dropping an anti-bias and diversity curriculum produced by an organization that fights anti-Semitism after several anti-Semitic events. Pictured: an excerpt from the video 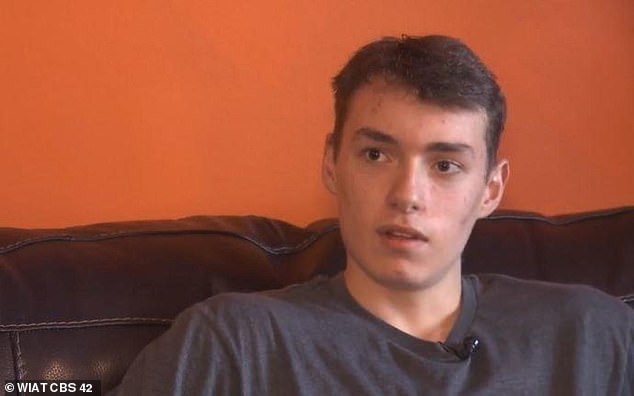 Ephraim Tytell, the only Jewish student in the 11th grade history class, (pictured) was reprimanded by the school after sharing a video of the inappropriate assignment 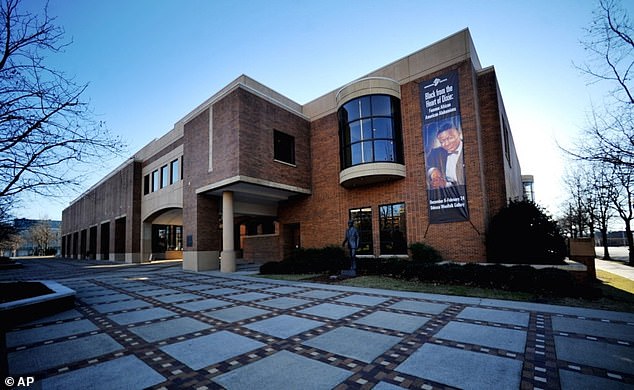 “They kept telling me I was making Mountain Brook look bad for uploading the video and sharing it and asked me to apologize to my teacher, which I refused,” he said. he declares.

“The next day he did our class, and our class only, hung up our phones and he moved me from sitting in the back of the class to right next to him.”

The lesson would aim to show how the symbols change by demonstrating that something very similar to what is now widely known as the Nazi salute was used before World War II to salute the American flag.

The “Bellamy Salute” was discontinued in 1942 for the right hand over heart gesture after the United States entered World War II.

Mountain Brooks’ population is 97% white with a median household income of $152,355, making it the wealthiest suburb in the state, according to the US Census Bureau.

The Mountain Brooks school system was previously considered one of the three most segregated school systems in the nation, according to the nonprofit. EdBuild.

On Tuesday, the school system released a statement saying the video and photos shared online “are not representative of the lesson” and that no one attempted to teach students how to give a Nazi salute.

With the blowback continuing, the system followed up Thursday with a more conciliatory statement, which read in part, “There are more effective ways to teach this subject without recreating painful and emotional responses to the atrocities of history.” 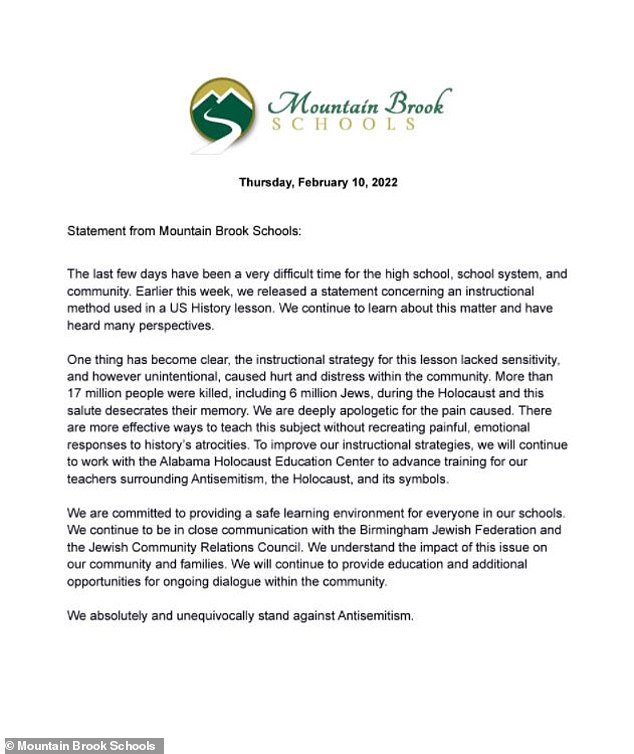 “To improve our instructional strategies, we will continue to work with the Alabama Holocaust Education Center to advance the training of our teachers on anti-Semitism, the Holocaust, and its symbols,” the statement said.

The school system said it “absolutely and unequivocally” opposes anti-Semitism.

The Jewish Federation of Birmingham said the district’s follow-up statement was the “direct result” of conversations it had with school system leaders.

School officials “recognize and fully understand the insensitivity of classroom instruction that day and the lack of a safe space for students to learn,” the Jewish organization said.

William Galloway, a spokesperson for Mountain Brooks Schools, said it was against system policy to say whether the teacher remained in the classroom.

“Understanding the sensitive nature of this subject, Mountain Brook Schools has addressed the instructional strategy used with the teacher and does not condone modeling of this greeting when an image or video could accurately convey the same message” , says the statement from the school system. 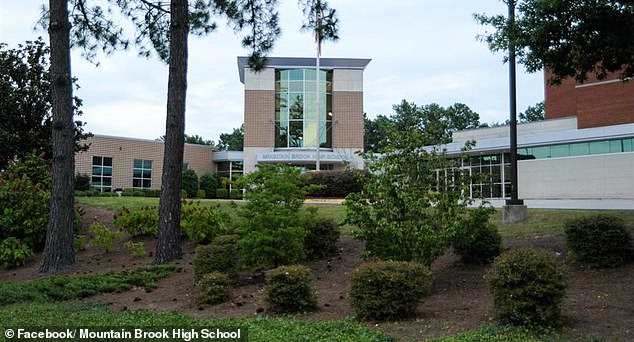 Mountain Brooks’ population is 97% white with a median household income of $152,355, making it the wealthiest suburb in the state, according to the US Census Bureau.

Mountain Brook Listens, a group that works to promote diversity in the virtually all-white town of 22,000, released a statement saying the incident showed the need for more resources, education and training to understand bias implicit, develop empathy and act with more compassion.

“And our whole community, including our school system, needs to foster an environment where people feel safe to report behavior that worries them and certainly not create an environment that cultivates ‘fear of retaliation,'” he said. declared.

Last year, the Mountain Brook school system responded to community complaints about a diversity program produced by the Anti-Defamation League (ADL) by scrapping classes. Schools had started using the material after anti-Semitic events, including a video of a student with swastikas drawn on his body.

Opponents claimed the lessons focused too much on race and gender and criticized the ADL as being too political.